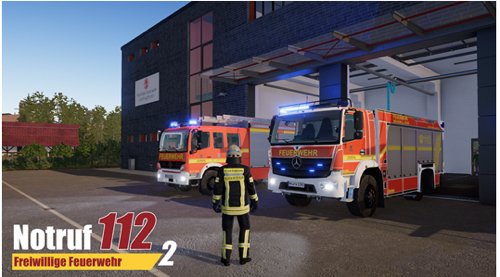 Germany has more than 20,000 volunteer fire departments, and the game developer wants to show the public what volunteers do

Publisher Aerosoft and developer Crenetic are planning major innovations for the game Emergency Call 112 – The Fire Fighting Simulation 2: In August, the Volunteer Firefighters will appear as a free DLC for this simulation.

In Emergency Call 112 – The Fire Fighting Simulation 2, the professional fire department still leads the charge, but in the upcoming DLC, the volunteer firefighters move into action.

“In Germany, we have just over 100 professional fire departments, but well over 20,000 volunteer fire departments. With the DLC, we want to show all players what all volunteer firefighters do for us every day. To realistically reflect the lives of the members, players can expect many innovations in the DLC compared to the main game,” says Carsten Widera-Trombach, CEO of Crenetic.

This time, players don’t wait on stand-by in the fire station before getting the signal to head to a call. With the main fire department, players go down the fire pole to move from the crew compartment to the emergency vehicle as fast as possible. However, in the new DLC, they go about their personal lives as volunteer firefighters. Players have their own neatly furnished apartments and do all the things you’d expect to happen at home. That is, until a call from the fire station comes and pulls them out of their daily routine. Now it’s a race against the clock: Get into your car, drive straight to the fire equipment building, and get ready for action!

In the DLC, players experience first-hand what it means to join the volunteer fire department. At first, players are only allowed to take on a limited number of tasks. However, as the game progresses the selection increases tremendously. Players even guide the professional development of their character, deciding which training courses they should take part in. This then influences which activities are possible during upcoming missions. In the main game, players can switch from one task force to the next at any time. In the DLC, players instead concentrate on developing their sole character. After basic training, they can shape their character’s career in the volunteer fire department themselves.

Related: Like US, Germany struggles to recruit volunteer firefighters

Crenetic has created a realistic fire station with detailed seminar rooms, changing rooms, and a dedicated vehicle hall for the volunteer fire department. The Broich fire station of the volunteer fire department in Mülheim an der Ruhr in Germany served as a real-life model for the developers. Not only were the rooms recreated with great care, but also the vehicles. In addition to the HLF 20/6 fire engine, the simulator also features the modern TLF 3000 fire engine. Switch on the siren and fire up the blue light. Open cabinets, roll out hoses – simply everything that is possible in the real vehicle role models also works in the Volunteer Firefighters DLC.