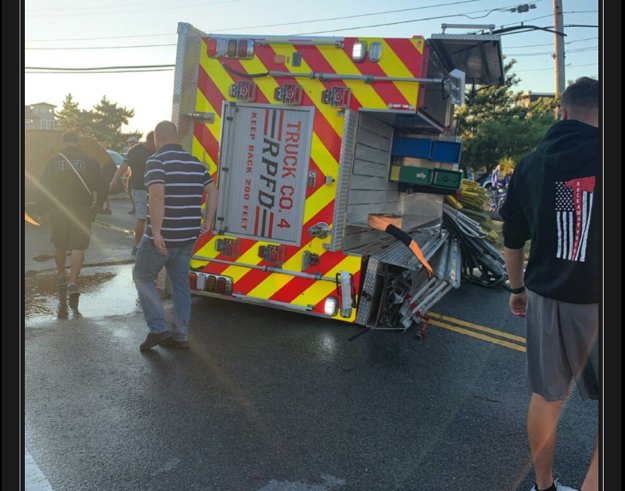 A volunteer firefighter was injured Saturday evening when he swerved to avoid another vehicle and overturned the fire truck in Breezy Point, Queens, FDNY fire officials said. The injured Rockaway Point firefighter was taken to Community Hospital in Brooklyn where his injuries were not considered serious.

The crash occurred at 5:27 p.m. Oct. 3 when fire officials said the pumper from the Point Breeze Volunteer Fire Corps was traveling on Rockaway Point Blvd, when the driver told police from the 100th Precinct that he swerved to avoid another vehicle, causing the truck to flip onto its side at about Beach 215th Street. FDNY and police rushed to the scene to find the driver already out of the fire truck.

NOTE: Located in the Breezy Point section of the borough of Queens, New York City – the Rockaway Point VFD operates as one of the nine volunteer fire departments (and dozens of volunteer EMS companies) within New York City (under the command of the FDNY when on scenes) providing neighborhood local fire and rescue services.

When walking into the Rockaway Point Volunteer Fire Department (RPVFD) building in Breezy Point, your heart would be immediately warmed by the big smiles of their band of vollies. The Rockaway Times was honored with an opportunity to tour RPVFD’s building (204-26 Rockaway Point Blvd), meet with the volunteers and attend the department’s weekly fire drill. Though it was a frigid, breezy evening, at 7 p.m., the firehouse was already packed with volunteers, widely ranging in ages and backgrounds. Some are still in high school, others college students and the rest working full-time jobs. However, what unites them? Their determination to protect and care for the surrounding communities of families that they love.

RPVFD secretary, and former lieutenant and acting captain of the department’s rescue team during Hurricane Sandy, Lauren Willis, is a watch commander at NYC Emergency Management (NYCEM). “I love my job, every second of it, but I could never give up volunteering here,” Willis said. “When I first started volunteering, I was the ‘little kid’ here. From a young age, I learned how to save people’s lives, while making friends. RPVFD is a great outlet for kids. It keeps them out of trouble, while giving them an invaluable skill set they can implement every day in every aspect of their lives, whether inside the community or beyond. Look at the job I do today at NYCEM. RPVFD prepared me for that,” she said.

Willis also emphasized the strong familial relationship the volunteers not only share with each other, but with the communities they serve at large. “Like the rest of Breezy and Roxbury, Hurricane Sandy decimated our building and equipment. We were totally inundated with water, but the community banded together to help us rebuild. Neighbors donated furniture, local artists donated their paintings to brighten up our space. We couldn’t have come back bigger and better without our community’s support,” she said.

Lining the walls of the building’s second floor are memorabilia from the past, which thankfully were not lost in the storm. Photos from the early years powerfully illustrate the department’s deep-rooted Breezy history. There are even old fire cans craftily converted into lamps.

What sets RPVFD apart from other NYC volunteer fire departments is their prowess in water rescues as they are amply equipped with water-specific rescue equipment, including survival suits, rescue cans and even surfboards. In addition, their trucks’ four-wheel drive power enables them to access the uniquely narrow beachfront roads of Breezy and nearby Roxbury in any weather.

RPVFD consists of truck, engine and rescue companies, which all fall under the umbrella of their emergency nonprofit corporation. RPVFD’s senior officers, besides Willis, include: Department Chief Jimmy Morton (who works full-time with the NYC Department of Sanitation); Deputy Chief of Operations Steve Mastrandrea; Deputy Chief of Administration Artie Lighthall, (who recently celebrated 50 years of service with the department); Captain of Fire Co. Brian McNamee, (a full-time college student); Captain of Rescue Co. James Traver, (a nurse); two lieutenants of Fire Co.: Matthew Piccione, Jr., (a reserve of the U.S. Marine Corps) and Patrick Cusack; two lieutenants of Rescue Co.: Daniel Traver (studying to be a nurse like his brother, James) and Christina Arasin, (a public school special education teacher and sister of Chief Morton).

Working with the senior officers are scores of eager volunteers. Anyone of any age can volunteer with the department, however, to be a junior firefighter, you have to be age 15 and over, and pass a background check. Also all aspiring junior firefighters have to take a fire certification course offered at institutions such as the Nassau County Fire Service Academy.

However, according to Lieutenant Piccione, Jr., the most essential element the department looks at is the applicant’s character. “Anyone can express their interest in joining the department. However, their success in joining our brigade is based on our character assessment of the individual,” Piccione said.

Piccione also stated that RPVFD is a very aggressive interior operation company. “Unlike other volunteer fire companies, who just work around basic rescue, we also focus on saving property, which is a major priority of small vulnerable communities such as ours that are close to the water. We want our volunteers to be prepared and aware of that,” he said.

At Wednesday’s drill, all the vollies were timed on how quickly they got their PPE on, and then proceeded into the fire truck, where they headed for a nearby open space, where they practiced activities such as hosing. After the drill, they then huddled to review what they just did, and assess what they could have done better and faster. And of course, discussed what could be done more efficiently next time, especially when faced with an actual rescue.

One new recruit, Belle Harbor resident, Rachel Sito, was there to watch the drill. When asked why she wants to be a volunteer with RPVFD, she said, “I used to live in Breezy, and know many of the people in the department. When I recently took the city fire test to join the department, my mom showed me a photo of myself as a little kid in front of the Breezy Firehouse. I look up to the vollies because they unselfishly give their time to keep the community safe. RPVFD feels like being at home with family,” Sito said.

Before each meeting and drill at the firehouse, one of the vollies said that they all say the Pledge of Allegiance and the Fireman’s Prayer. He said, “In the Fireman’s Prayer, what jumps out for me is this verse, ‘I want to fill my calling and to give the best in me, to guard my neighbor and protect his property.’” RPVFD has been dedicated to guarding and protecting their neighbors for 104 years and they’re not stopping anytime soon.

For more information about the RPVFD and to donate, visit their Facebook page, Rockaway Point Volunteer Fire Department, email: [email protected] or call 718-474-2593.