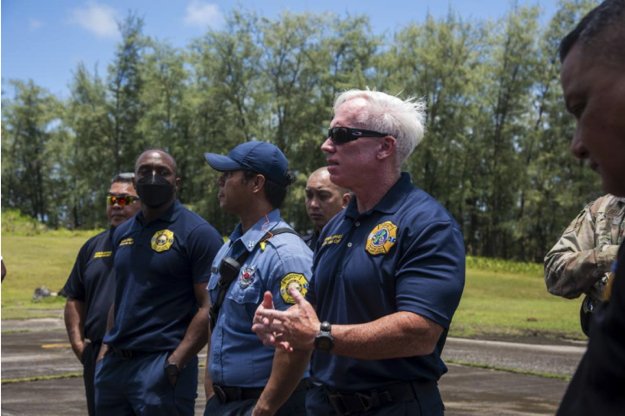 The training aimed to improve air to ground interoperability when responding to wildfires in Guam.

“Having a bird’s eye view can actually give us a little better direction of where the fire’s moving, who’s actually going to be threatened, and it’ll help us organize our thought process should any kind of evacuation start needing to be held,” JRM Region Fire Chief Christopher Connelly said. “We’re all in this together, and for us to be able to launch the U.S. Navy aircraft and get water deployed in a quicker manner, prevents the spread of the fire, it prevents the environmental impacts of fire spread, safeguards the structures, as well as for us responders, we don’t necessarily have to go as deep into the wildland fire and put some of our crews at risk as well,” Connelly said.

During the training, HSC-25 crew members familiarized JRM and NBG Fire and Emergency Services (FES) personnel with their helicopter bucket, which can deliver up to 420 gallons of water per release for aerial firefighting, discussed radio communications, and explained how to extract helicopter personnel in the event of an emergency landing.

“JRM and federal fighters do this as their primary mission, [but] this is probably a second or tertiary mission for us,” he said. “We enjoy helping out, we want to help out, and this coordination team meeting lets them understand our capabilities, and limitations, and our availability as well.”

Joint Region Marianas and the Government of Guam hold a mutual-aid agreement, which provides coordination for emergency response across the island. Connelly looks forward to further integrating FES capabilities with HSC-25 to augment support of mutual aid missions in the region.

“We have paramedics that are assigned to the fire engines, and we have an ability to bring [advanced life support] to the helicopter squadron,” he said. “So we’re going to start working with the crews so we can actually board the aircraft in the event that they need our services, and potentially service the community a little better.”

In 2022, Navy FES has responded to three grass fires. HSC-25 also assisted with aerial observation in response to a grass fire and has completed six medical evacuations, nine searches, and six rescues.