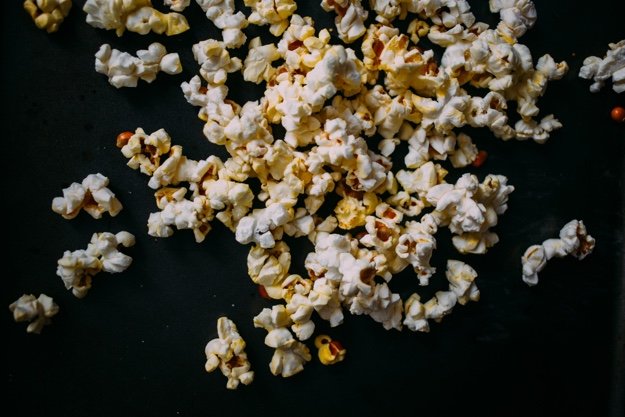 You probably don’t give a lot of thought to popcorn. You take a bag of microwavable popcorn out of the cabinet, toss it in the microwave and wait a few minutes for it to be ready. If you cook it to the recommended time, it comes  out hot and ready to eat — perfect every time. You pour it in the bowl and head to the couch to munch down.

If you never gave it a second thought, you are not alone. Most of us simply enjoy.

Well, simple, unassuming popcorn has a long history in the United States. It started being produced in the south, and by the 1840s it had a foothold in the American snack world.

In the late 1890s Louis Ruckheim created Cracker Jack. It was made from popcorn, peanuts and molasses. It became a household name with its famous prize in every box and mention in the baseball anthem “Take Me Out to the Ballgame.” Now owned by Frito Lay, it remains an iconic American snack.

A popular way to home-cook popcorn was using a pot with hook and knob running through the lid — allowing the kernels to be constantly stirred during stovetop heating. Then in 1959, Jiffy Pop burst on the scene. It featured corn, oil and seasoning contained in an aluminum bowl that expanded when heated on the stovetop or campfire.

It was developed by an Indiana chemist and later became the subject of a patent lawsuit — a similar product came out five years earlier, but an appeals court ruled Jiffy Pop did not violate patent laws.

Now owned by ConAgra Foods, it is still on the market and even a humorous fire alarm meme.

But the popcorn industry was due for another major disruption.

Although the first microwave was invented in 1946, it didn’t become commonplace in American kitchens until the 1980s. It proved to be a match made in heaven for popcorn, which popped just as well in microwavable packaging as it did on the stove.

It was an undeniable hit. Within two years, microwave popcorn was available nationally and brought in $53 million in sales, according to a New York Times report. By 1984, a shelf-stable version hit stores, and sales climbed even higher. Americans bought $250 million worth of popcorn in 1986, setting off an all-out battle between snack food companies attempting to corner the market.

Unfortunately for Nabisco and General Mills, one agricultural scientist had already become an unlikely popcorn king among men.

Orville Redenbacher, a skinny, bespectacled man from Indiana with an immaculate suit, bow tie, a swoop of silver hair and a funny-sounding name became the face of popcorn.

Redenbacher was a Purdue-educated farmer who became famous for tinkering with hybrid varieties of corn. In 1965, Redenbacher and his research partner, Charlie Bowman, successfully created a kernel that would expand twice as much as the familiar yellow corn. They called their hybrid snowflake for its shape and ability to expand to up to 40 times its original size.

Basically, Redenbacher was responsible for the most recent and lasting transformation to hit the popcorn industry. The snowflake hybrid Redenbacher and Bowman developed accounted for 45 percent of the total microwave popcorn market at the time of Redenbacher’s death in 1995.

One of the amazing facts is that Redenbacher spent 40 years of his life growing and changing his popcorn before he was satisfied with the brand. His persistence paid off as his popcorn brand it still the most popular band. Persistence does pay off.

It is easy to think industry disrupters like Amazon or Redenbacher exploded on the scene and took the world by surprise. But a deeper look shows how much persistence had to be logged before that disruption came to be.

If Redenbacher can take four decades, to getting it right, then believe in your idea and adapt them until you get them right. The winning formula is to innovate, evaluate, adapt and innovate again. Persistence is key at every step.

And a well-run volunteer fire department is just as satisfying as any bowl of popcorn.

Ken Farmer started his fire service career in 1973. During that time he has served as director of the North Carolina State Fire Commission. He’s been director of fire and rescue training as well as distance learning for North Carolina Community Colleges. And he serves as the National Fire Academy’s director of leadership and community risk, and adult learning and field programs. He was a member of the Fuquay Varina Fire Department, where he rose to the rank of fire chief.