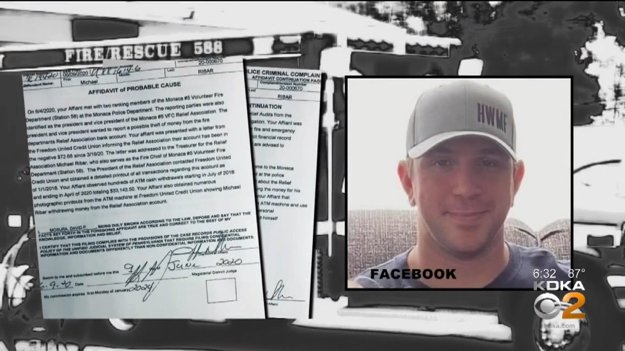 Investigators say the chief admitted to taking the money to pay his rent, utilities and put fuel in his vehicle

A Beaver County fire chief is facing felony charges Wednesday. Police in Monaca accuse Michael Ribar of stealing more than $30,000 from the department he leads.

The investigation now involves the Attorney General’s office. A media spokesman says that the office will now conduct a new audit of the volunteer fire department.

The Monaca Police Chief tells KDKA’s Meghan Schiller that two members from the volunteer fire department came to the police station on June 4 to report missing money. They said the Volunteer Fire Department’s Relief Association bank account had been in the red since March 16 and they didn’t know why.

The police report says Chief Ribar served as the treasurer for the Volunteer Fire Department’s Relief Association Bank Account. He’s accused of driving to an ATM hundreds of times and withdrawing a total of $33,000 since July of 2018.