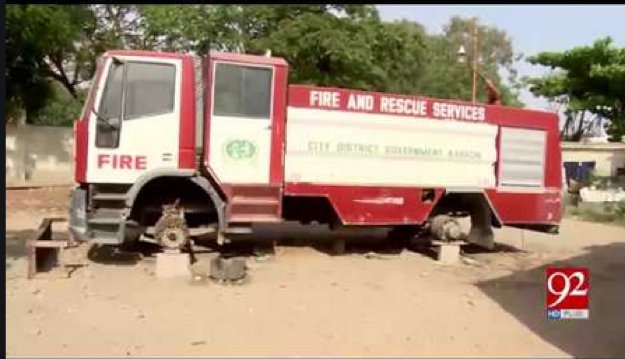 Only 13 of 50 Karachi Firefighting Apparatus Work

Karachi, a bustling city of over 20 million people, is catered to by only 13 fire tenders. The metropolis, one of the largest industrial hubs of the country, is home to several factories and warehouses which are often prone to accidents. However, only 13 of the Karachi Fire Brigade’s 50 fire tenders are currently in use while the rest remain out of order. This means that each fire station currently operating only has one fire tender it can rely on. If it fails, the entire station in effect is rendered useless.

Moreover, in case of multiple fires, the fire department’s ability to respond to them all in a timely manner is severely compromised. Such a situation arose on Sunday morning when shops at a timber market in Old Haji Camp caught fire at around 7am and a little over an hour later, another fire erupted at an old timber warehouse in Landhi 89. Earlier, between Friday and Saturday, the city witnessed at least four separate cases of fire which resulted in the death of a minor girl. The fires also engulfed merchandise worth thousands of rupees and caused the deaths of several livestock.