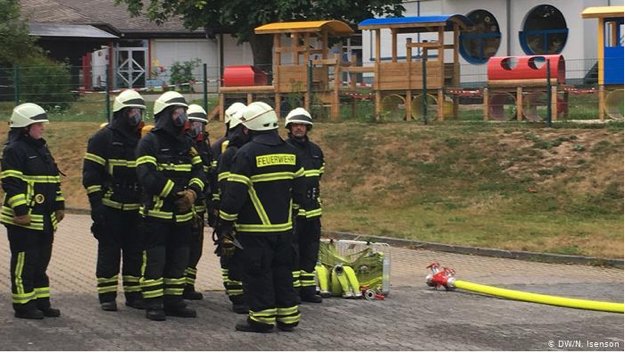 Just as demographic change is reshaping German society, so too is the aging population having an impact on its more than 22,000 voluntary fire brigades. The German Firefighters Association (DFV) has seen a steady decline in the number of volunteer firefighters for years. Whereas nearly 1,070,000 people were members of voluntary fire brigades in 2000, by 2016 that figure had fallen to around 995,000, according to the DFV.

That wouldn’t matter much if firefighting was just a hobby that people did to spend time with their neighbors, keep in shape and contribute to the community. But here the volunteers are indispensable both for the cities and the countryside. Only Austria has a similar system of relying on volunteers.

“It is a treasure that we have in Germany that is easily taken for granted,” says Carsten-Michael Pix of the DFV, in Berlin. “In every small place in Germany you have a voluntary fire brigade, which can’t do much alone, but the sum of many small fire brigades is, societally as well as for the actual purpose, a huge treasure.

Indeed, German hasn’t experienced massive wildfires raging out of control, as has been the case in other countries, he says, thanks to the voluntary fire brigades’ comprehensive coverage. Even in the most remote parts of the country, firefighters are not far away.