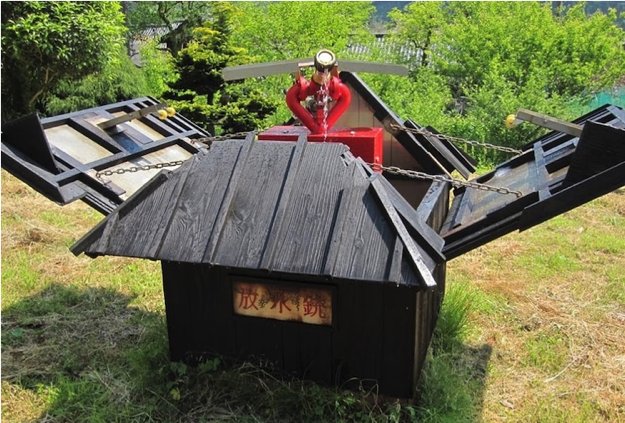 By Samantha Pires, My Modern Met

Twice a year, the picturesque and quiet village of Kayabuki no Sato puts on a popular water display. Though the event does attract tourists, its true purpose is to test the 62 fire extinguishers scattered across the historic site. Just before the houses (and the passersby) are doused with water, small huts designed in the traditional style of the village open up their roofs to reveal hidden mechanical sprinklers. As each hut transforms to a fire-fighting device, intense streams of water shoot up into the sky and rotate from left to right. This occurrence is fittingly called the “Water Hose Festival.”

The spectacle has an important backstory. A historical archive facility sustained a devastating fire two decades ago that prompted future protective measures. Through the cultural loss, a fun new tradition was born. Similar processes occur at other vulnerable sites, such as Shirakawa-go, to celebrate the effort to preserve history and culture.

What makes this site so important that it warrants such extensive fire protection? Each structure in Kayabuki no Sato is designed in the Gassho style—a typology developed to help houses survive in the heavy snowfall and harsh climate typical to the mountainous region. The name “gassho” refers to a hand pose that is used when one brings both hands together to pray. The thatched roofs are brought together in a similar way and allow snow to easily fall off the sides. This distributes the load and keeps the roof from collapsing.