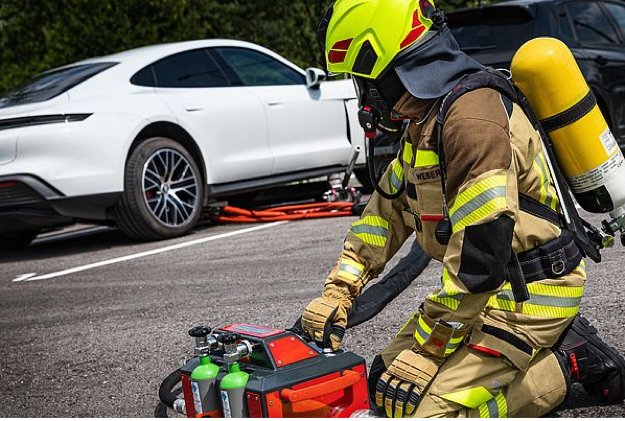 The extinguisher system will be ready for delivery in early 2022

Rosenbauer launches a new extinguishing system for burning traction batteries in electric vehicles. The system can be used to safely and efficiently extinguish lithium-ion based high-voltage batteries. It enables direct cooling of the battery modules, or the cells within the modules, and thus a quick stop to the propagation of the thermal runaway of the cells.

Firefighter safety will improve because they will only be in the vicinity of the burning vehicle for a very short time and the system is activated from a safe distance. The extinguishing system applies the water exactly where it is needed to cool the cells and modules in the battery housing. This system reduces the spread of flue gases to a minimum.

The system consists of two main components, an extinguishing unit and a control unit, which are connected to each other with hoses. The extinguishing unit is positioned on the battery and, if necessary, supported on the car body or other points. The preferred position is between the road and the vehicle when the vehicle is on all four wheels. It is also possible to use the system via the interior and luggage compartment, or from the top in the case of vehicles lying on their sides or on the roof.

After the battery has been cooled to the point where the cell temperature is in a safe range, the vehicle is ready for transport. The extinguishing unit can remain in the battery during transport and at the quarantine site. This allows water to be quickly pumped into the battery housing at any time, regardless of whether the vehicle is being transported with a roll-off container dumper or on a tow truck with a fire blanket.

The system has been tested in numerous fire tests by Rosenbauer with a wide variety of battery designs (pouch, prismatic and round cells) in different vehicle platforms. In addition, industrial, professional, and volunteer fire departments across Europe have been testing the system for months with their operational tactics, operational technology and crews, demonstrating that it is compatible with existing resources and tactics.

The new Rosenbauer battery extinguishing system can be ordered now and will be delivered at the beginning of next year.