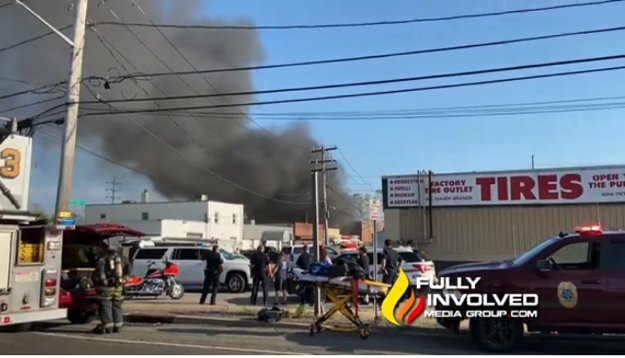 A commercial building in Farmingdale was destroyed by a massive fire Friday evening. Firefighters rushed to Tronic Plating Company, Inc., a plating service at 37 Potter St., around 5:30 p.m.

Eight employees were inside the building when the fire broke out, and they were evacuated without injuries, Nassau police said. Fourteen fire departments responded with roughly 150 firefighters and extinguished the flames. Two firemen suffered smoke inhalation and were brought to a nearby hospital for treatment.

The fire caused the roof to collapse, and due to the unknown chemicals at the site, the Nassau County Haz-Mat team was called in, according to Farmingdale Village. The fire was under control by 8 p.m., and its cause is under investigation. The Town of Oyster Bay Building Department will inspect the structure.

“The volunteer fire and emergency responders are heroic and truly appreciated for their dedication and service,” Ekstrand said. “The coordination of fighting the fire with all these other departments from the command post set-up and run by Chief Michael DiBartolo is truly amazing.”